How to Calculate Passing Rate with scores ranging from 1-5

@Lance - Thank you for posting your query. Can you please provide a bit of details of the existing dataset and your expected output with an example so that I can try to replicate it at my end? Thank you! 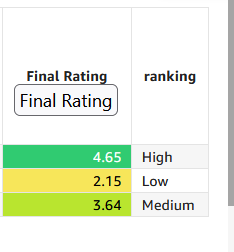 I have this raw scores named as "final rating 5 as highest 1 as lowest value and 3 as passing rate. I wanted to compute the passing rate percentage of each team, each score represents 1 team

@Lance - Sorry for asking multiple questions. Just to confirm the understanding, according to the snapshot, it has 3 teams among which first and third team has passes (since the score is >= 3). What is the computation logic for Passing Rate % of each team according to the snapshot? If we were considering this entire dataset as one then the Passing Rate would have been 66.67% ( 2 Teams Passed / Total 3 Teams). However I am a unable to figure out the passing rate of each team based on this dataset? Some clarity on that would really help! Thank you!

I appreciate you for helping me out for this one, yes I wanted to make a visual and wanted to know what is the computation logic for Passing Rate% where in I could show the passing rate% of each team where in score is >= 3. I have a control above of my dashboard where I could select per team. My main question is how could I make a computation logic for Passing Rate% to create a visual where in my result would show as 66.67% for example when I use the dataset given above. Thanks for all your help.

This is the kind of visual I need to create. using the scores that I have. I have a dataset as well for pass and fail.