While using the Filled map visual chart and adding a hierarchy of Country, states and cities, the map is not able to drill down to cities within Kuwait. We can only go up to states (i.e Governorates in Kuwait). Also tried different spellings of the city names, but it did not work.

Is this an issue with the map of Kuwait or is it is an overall issue? If this is a problem only for Kuwait country, then can we resolve this using some workaround?

Any leads would be appreciated. Thanks!

@Devika_Quantiphi
I am curious if you are not able to visualize any of the cities or you can visualize most of the cities with some exceptions. If latter is the case, that could be because there may be multiple cities by same name and Country-State-City hierarchy is not able to uniquely resolve that city. In this case, I would suggest to include another level to hierarchy such as county so hierarchy will look like Country-State-County-City and will then identify that city uniquely. In case County is not applicable, there may be a County equivalent for Kuwait. Idea is you want to include a geo hierarchy that will uniquely resolve the city to be visualized on the map.

Let me know if this helps in resolving your issue.

Hi Deepak, thanks for your note.

Currently, we can only drill down up to the state level (i.e governorates as per Kuwait country’s hierarchy) in our filled map visual chart. If we drill down further to cities, it gives an error on the map as it’s not able to detect any of the cities in Kuwait for any of the states.
Also, we tried creating the hierarchy of Country-state-county-state, but still, the issue persists. Also, I don’t think there is a definition of a county in Kuwait.
Although while trying with different combinations we were able to plot Kuwait City on the map by considering Country - Kuwait, State - Al Asimah & county - Kuwait City. But this just worked for this example, it does not work for any other cities or locations.

Do we have a list of names of the cities and locations that the filled maps can support in Kuwait, as the names of the locations are also not consistent (eg. Al Asimah & Al-Asimah, Al Jahara, Al-Jahara)?

Sorry, I missed a key detail in your question, filled map don’t support cities. You can use State, county or zip code. So wanted to double confirm if you are using the filled map or points on map (see the screenshot confirming requirement for filled map)

As Deepak mention city is not support, however zip code is supported in filled map. Alternately you may consider PointMap visual if it help in your use case. Kuwait cities are shown in Point map visual. 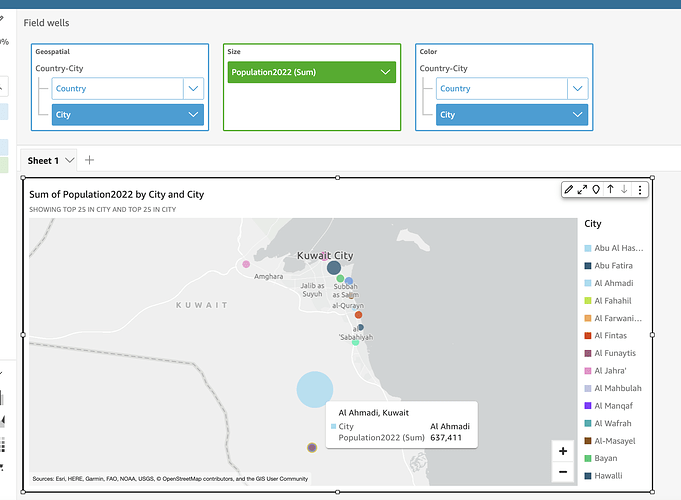 Hi, @Devika_Quantiphi. Did the response from @DeepakS answer your question? I am marking this reply as, “Solution,” but let us know if this is not resolved. Thanks for posting your questions on the QuickSight Community Q&A Forum!